This Arts and Events Calendar allows the City and community to post events in a common location to be viewed by the general public. Postings are for informational purposes only. Read the calendar disclaimer and learn about what events are included in this listing >

Presented by the Louisville Cultural Council

Founded in Ann Arbor in 2016, the Ivalas Quartet is composed of violinists Reuben Kebede and Anita Dumar, violist Aimée McAnulty, and cellist Pedro Sánchez. This year, the Ivalas Quartet has moved to to CU Boulder as the new Graduate String Quartet in residence mentored by the famed Takács Quartet. Tickets $10. Available at the door and at ivalas.brownpapertickets.com. 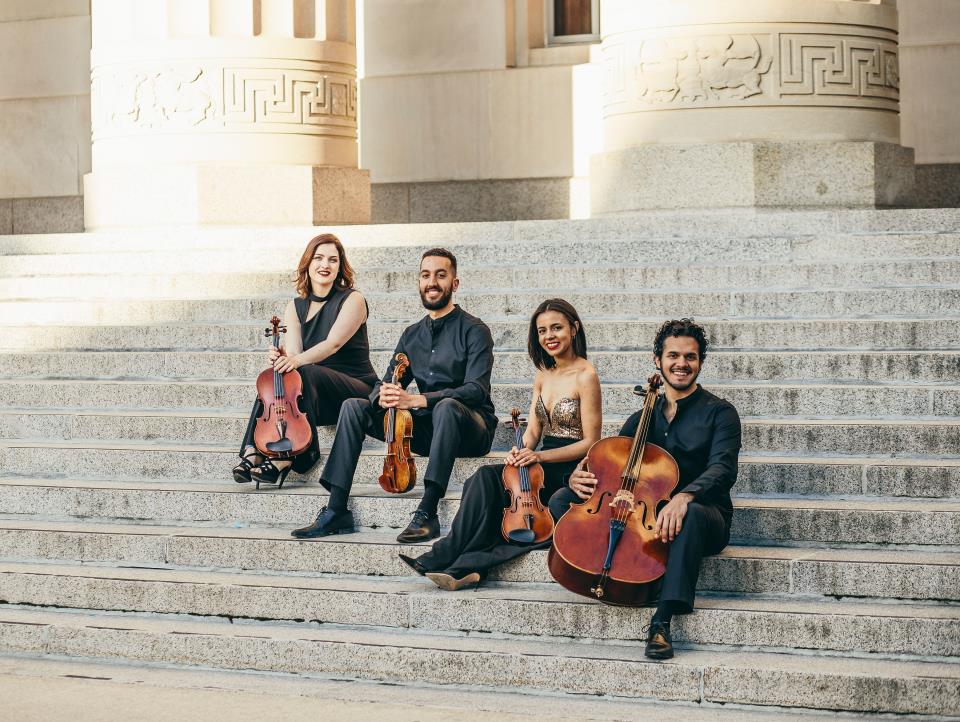 Founded in Ann Arbor in 2016, the Ivalas Quartet is composed of violinists Reuben Kebede and Anita Dumar, violist Aimée McAnulty, and cellist Pedro Sánchez. Ivalas has performed with artists such as the Calidore String Quartet, Imani Winds, Danielle Belen, David Ying, and Patricia Terry-Ross. The quartet has also been heard on WRCJ 90.9 FM’s Classical Brunch series and appeared at the inaugural Detroit Music Weekend. Maintaining their commitment to community engagement, Ivalas has also represented the Sphinx Organization playing for students in Flint and the Metro Detroit area. Recently awarded first prize in the 2019 WDAV Young Artists Chamber Music Competition, the quartet also took first prize 2018 Briggs Chamber Music Competition and was named a semifinalist group at both the M-Prize competition and Concert Artists Guild competition in New York. Last summer Ivalas was the 2018 Fellowship Quartet at the Bowdoin International Music Festival and in 2017 the group was named the Fellowship String Quartet at the Anchorage Chamber Music Festival, where they had the privilege of coaching young chamber groups, as well as studying intensively under Ayano Ninomiya. This year, the group looks forward to a rewarding summer beginning with the Great Lakes Chamber Music Festival where they will be studying under the renowned Emerson Quartet as the Sphinx Apprentice Ensemble, followed by the Center for Advanced Quartet Studies at the Aspen Music Festival to study with the Pacifica Quartet. Ivalas has been coached by members of the Calidore, Brentano, St. Lawrence, Escher, Ying, Turtle Island, Jupiter, and Pacifica string quartets, as well as Paul Katz, Jeffrey Zeigler, Mikhail Kopelman, Kirsten Docter, Richard Aaron, Danielle Belen, Stephen Shipps, Andrew Jennings and Kathryn Votapek. This fall the Ivalas Quartet moves to CU Boulder as the new Graduate String Quartet in residence mentored by the famed Takács Quartet.

Ivalas would like to extend a special thank you to the following organizations and individuals for their generous support of the quartet’s endeavors through travel funding and scholarships: The University of Michigan School of Music, Theatre & Dance, Center Stage Strings, the Sphinx Organization, EXCEL, the Mandell Collection of Southern California, Maurice Binkow and Freyja Harris at the SMTD Office of Diversity, Equity & Inclusion.