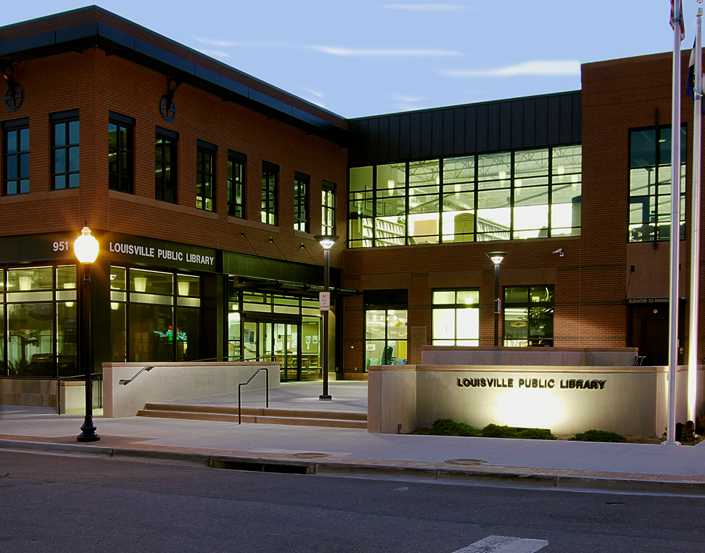 The Louisville Public Library has seen many changes since its humble beginnings in 1924, when the newly chartered Chinook Campfire Girls and their leader began collecting books donated by Louisville residents to form the heart of a public library.

The first home of the Chinook Library was the upstairs room of the old town hall, located near the south end of the 700 block on Main Street. When the Library was not open for checking out books, the room was used for other purposes and the boxed shelves were locked.

There were no funds for the support of the Library, so various women donated their time to supervise the circulation of books. Hours for checking out books were very limited and access to the second floor Library was difficult. Two years later, the sponsoring group of Chinook Campfire Girls had graduated from high school or left town.

On November 17, 1926, the members of the Saturday Study Club, formed in 1898, assumed the supervision of the Chinook Public Library. Each year, two members of the club were appointed by the president to serve a two-year term on the Library Board, which was composed of four women. A librarian was hired to open the Library one afternoon each week for the salary of 75¢ per week.

The Town Board of Trustees began to give financial assistance to the Library in 1929, and continued to give small cash allotments, to provide space for the Library, and to pay for utilities. The Library Board members made two trips each year to Denver to purchase books. After the fall purchase, the Saturday Study Club held a book review and silver tea to display the new books to the public. The silver tea became an annual fundraiser, which helped to fund the Library. According to the City’s new charter, adopted in March 1962, control of the Library passed from the Saturday Study Club to the City of Louisville as of October 1963. Thereafter, a City-appointed Library Board of Trustees determined policies.

The Library’s location has changed and evolved since its inception in 1924, as illustrated in the following timeline: