The City’s phased plan to reopen facilities and services is based on our commitment to protect City staff and residents, and in adherence with the most up-to-date State of Colorado and Boulder County public health orders. To learn more about which City facilities have reopened or plan to reopen, visit the COVID-19 webpage.

Unfortunately the Great Horned Owls did not choose a nest with a camera in 2020. Check back next year and in the meantime, you can still see footage of past activity below.

The Open Space Division has partnered with the Colorado Avian Research and Rehabilitation Institute (CARRI) to install two outdoor web cameras on select Open Space properties to view nesting activities of local raptors in 2020.  The City of Louisville is excited to provide an opportunity for viewers to watch courtship, incubation, and feeding activities of great horned owls during breeding season.  It’s going to be a real HOOT!  Below is some information on great horned owls:

The City of Louisville would like to give thanks to: 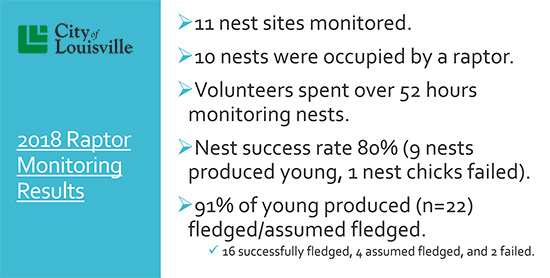 The 3 owl chicks have successfully fledged the nest cavity and the camera has been turned off for the season.  Thank you for watching and we hope you enjoyed all of the exciting nesting activity this season!